Samuel Smiths Organic Fruit Beer is the finest fruit beers available in the UK in my opinion. Clean, refreshing palate with well integrated and authentic fruit flavours and perfect balance between fruit and hops. A must try for all beer drinkers and a wonderful present. Gift-pack with 4 fruit beers. Cherry, apricot, strawberry and raspberry. 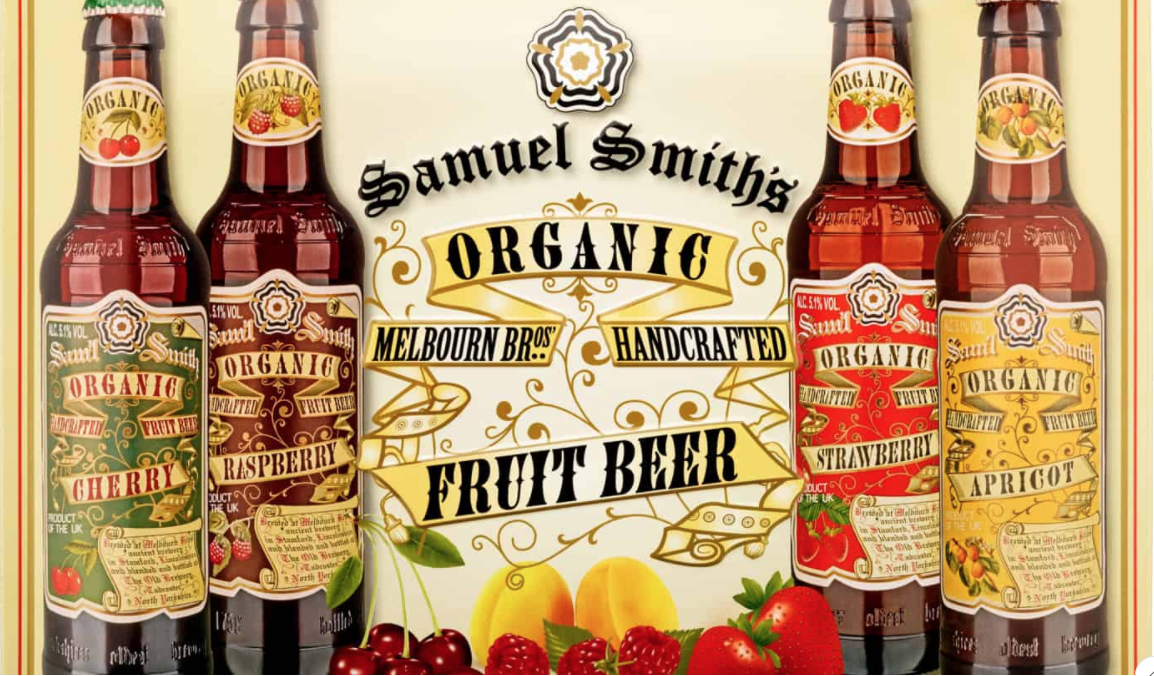 Samuel Smiths Organic Fruit Beer is what I consider to be the finest fruit beer available in the UK. The fruits flavours are subtle and authentic. Just the right amount of flavour and sweetness. Produced using original, restored 19th Century steam-powered brewing equipment and techniques, these are possibly the most historically authentic beers anywhere in the world.

The palate is clean, transparent and refreshing, which is a rarity with fruit beers. The fruit flavours are subtle, well-integrated and incredibly authentic, giving a complex and satisfying finish with just the right balance between hops, barley and fruit. Truly delicious and a fitting start to my venture into the world of organic beers.

This listing is for one of each flavour in a gift box. If you require a different selection, please specify which flavours you want in the order notes. In the absence of any instructions you will receive one of each.

Organic malted barley and wheat are brewed in the 142 year old mash tun with a hand-driven mashing-in device. When all the grains have mashed, the steam engine drives in-situ rakes to stir the grist.

The mash is left to stand for 90 minutes during which time starch from the grist is converted into fermentable sugars. At the same time, hot water is added to the surface of the mash from the sparging arms to help wash out all the available sugars.

After brewing the organic malted barley and wheat in the mash tun, the wort is boiled for an hour and a half in the antique open copper. Aged organic hops are added to raise the bitterness and balance the ultimate sweetness of the fruit.

The Coolship
The wort must be cooled before yeast is added. Louvred panels allow fresh air to enter the brewery and circulate around a shallow coolship.
Adding Yeast

The Briggs vertical fridge is an early energy saving device – the hot wort cascades over the outside while cold water circulates inside. An heat transfer takes place whereby the wort is cooled to 15 degrees centigrade as the cold water is heated to over 40 degrees in preparation for the next brew. Yeast is added to the cooled wort.

The yeast soon gets to work converting the wort to beer. During a period of extended conditioning, the beer slowly but surely develops an astonishing complexity.

The wort is blended with organic cherry, raspberry, strawberry and apricot fruit juices to create fruit beers of considerable strength and flavour.